Jefferson's athletic teams became known as "The Cannoneers" in the late 1960's. The name is a reference to local War of 1812 history, with significant battles being fought with the British in nearby Sackets Harbor, on the shores of Lake Ontario. The cannon was an important weapon in land-sea battles of this period, with the cannoneer being the person to load, fire and maintain the cannon. The cannoneer, a member of the field artillery unit, typically carried sacks of gunpowder and a "sponge" tool, which was a wooden pole covered in lambskin or a bristle brush, used for cleaning the barrel or "bore" of the cannon after use. In today's military, the field artillery cannoneer works with a modern cannon - the howitzer. 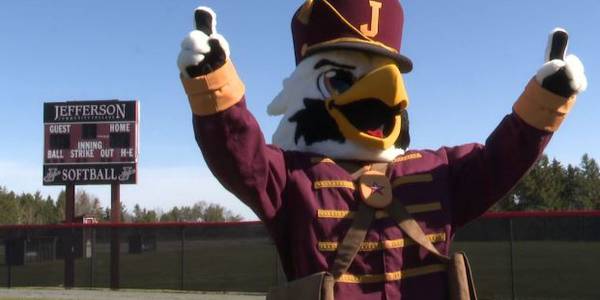 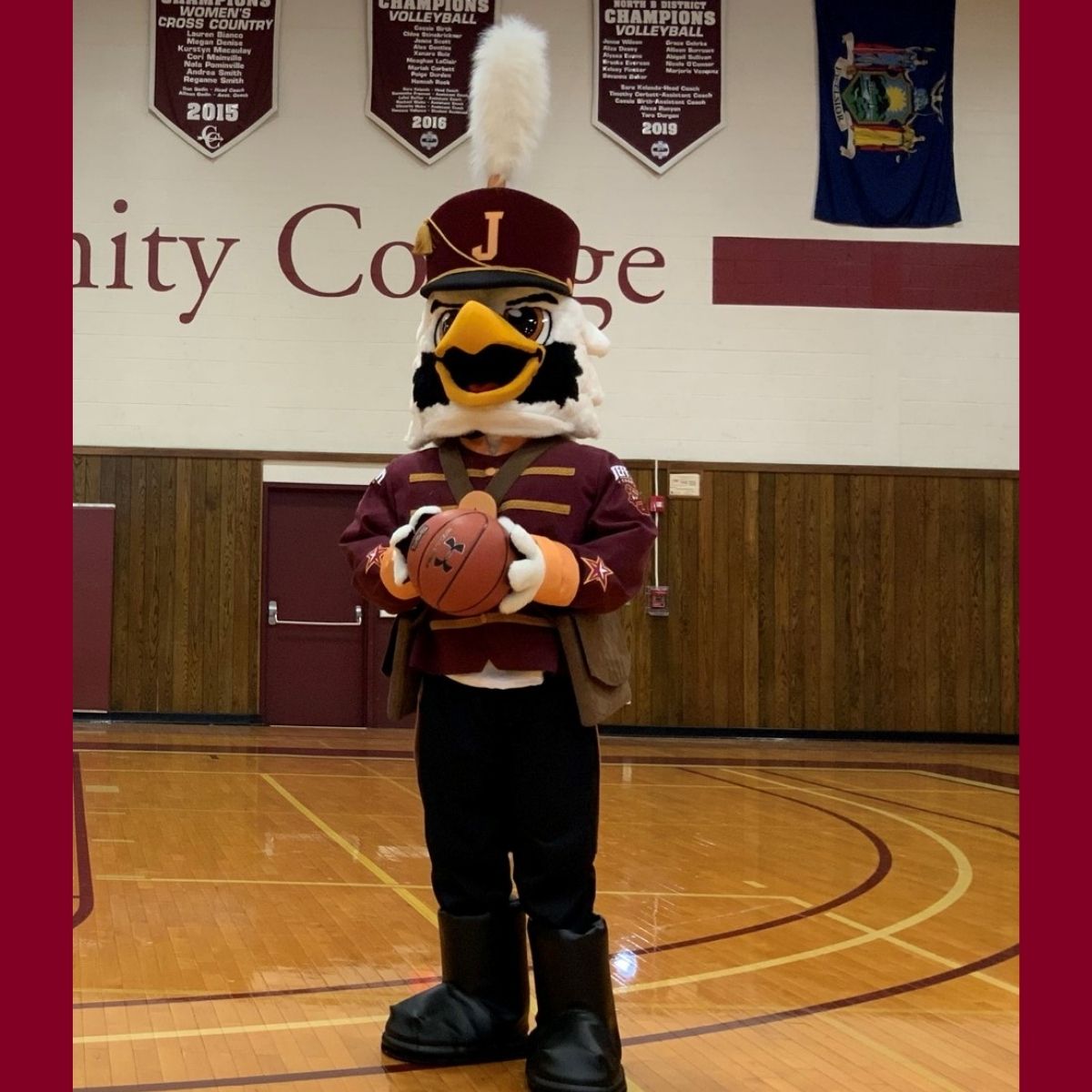 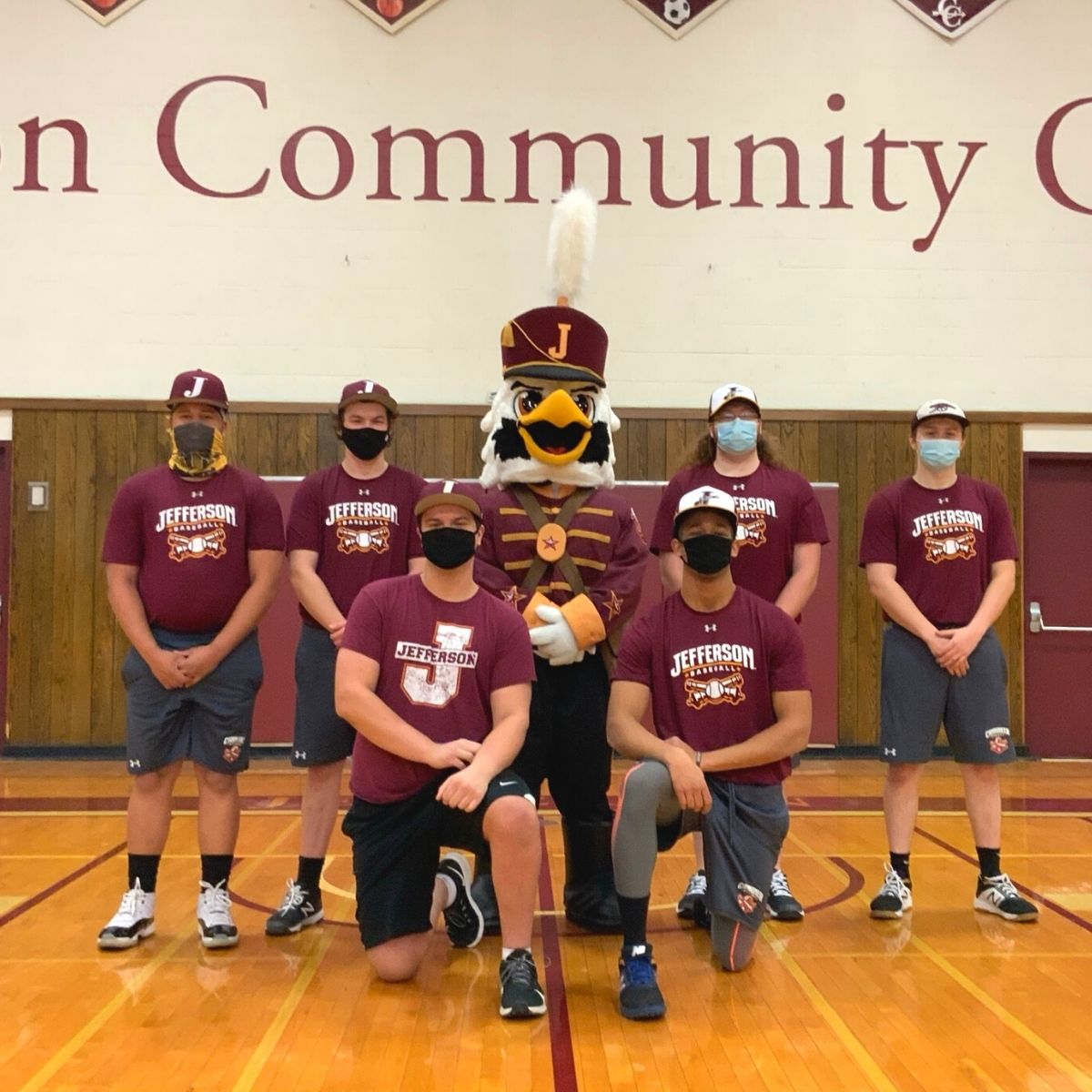 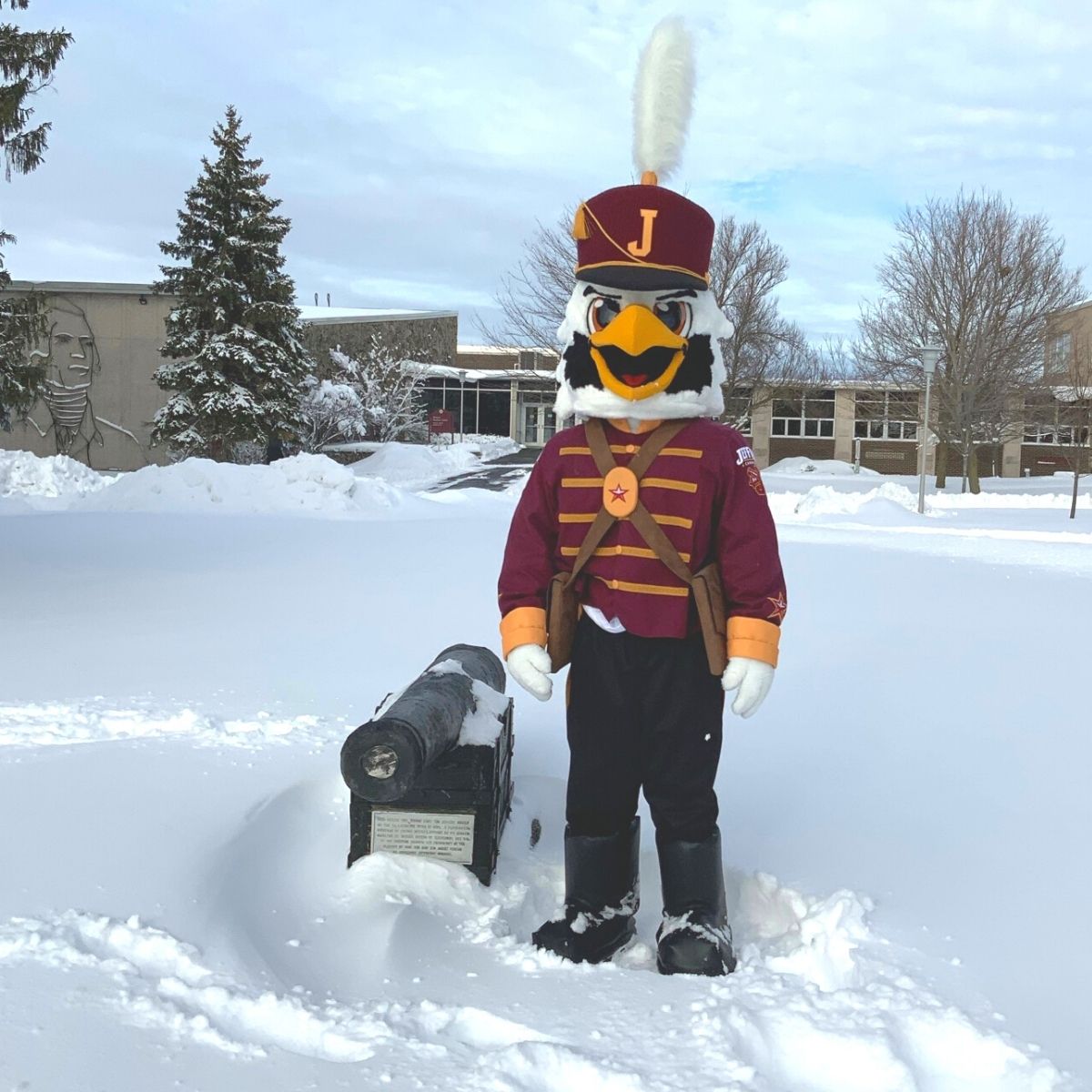 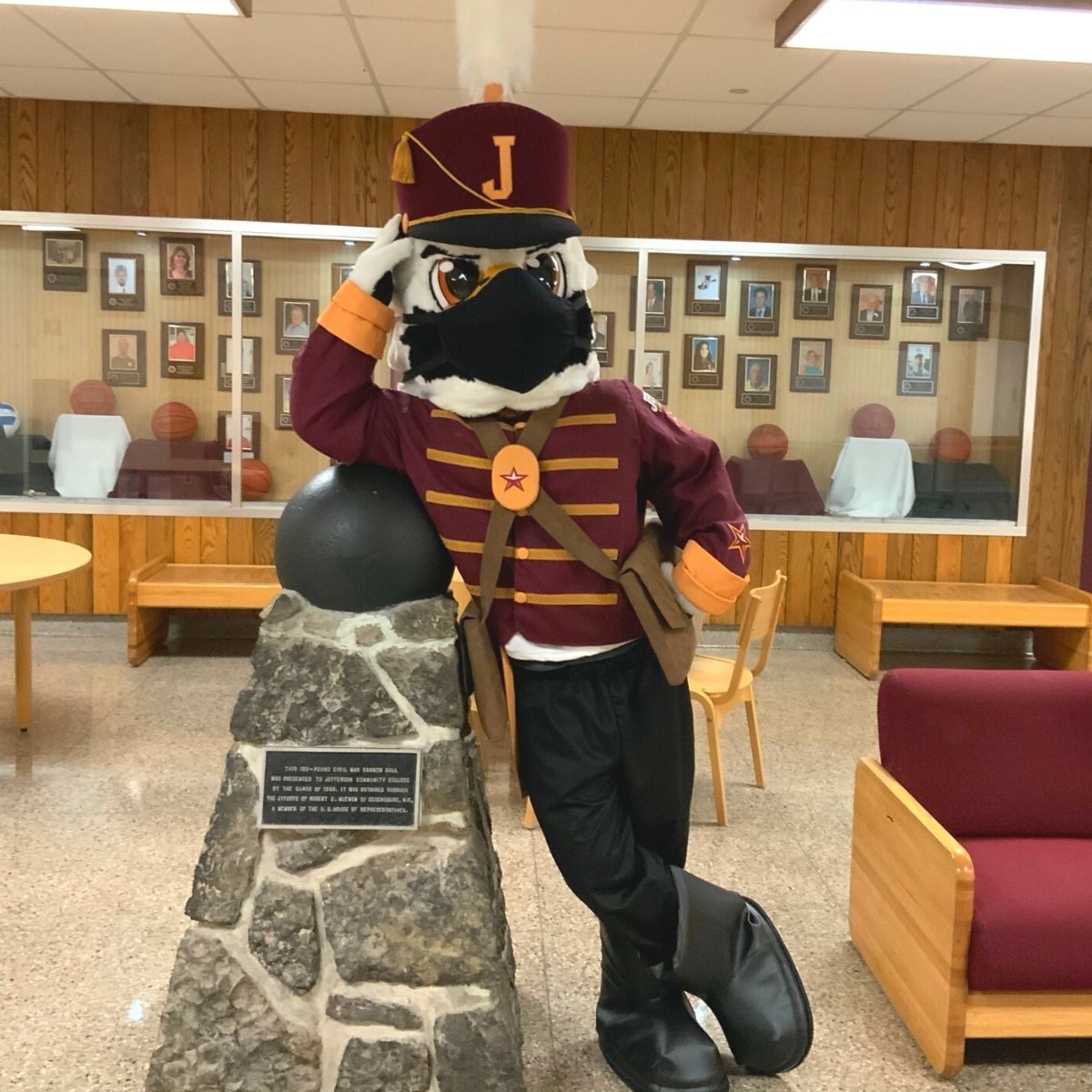 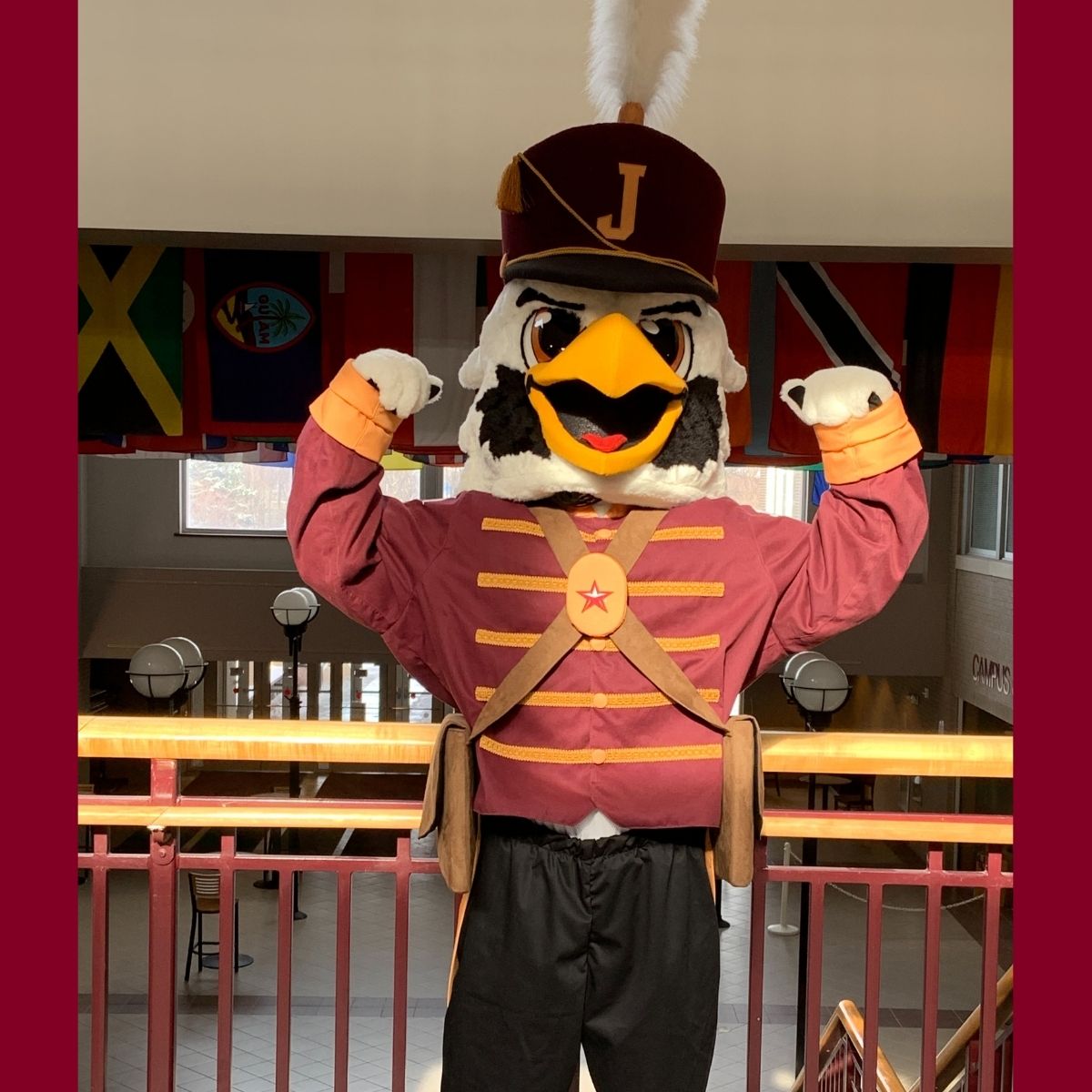 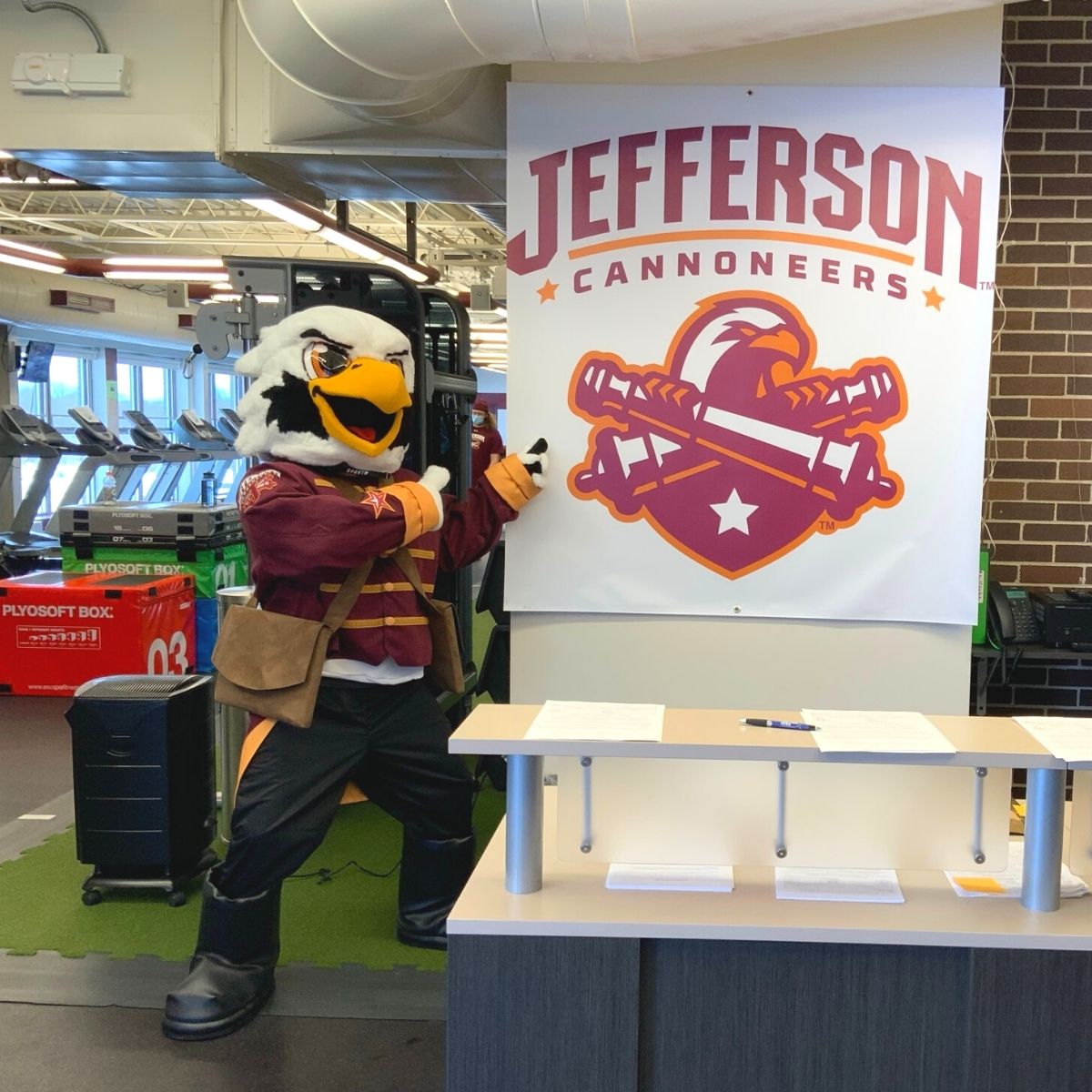 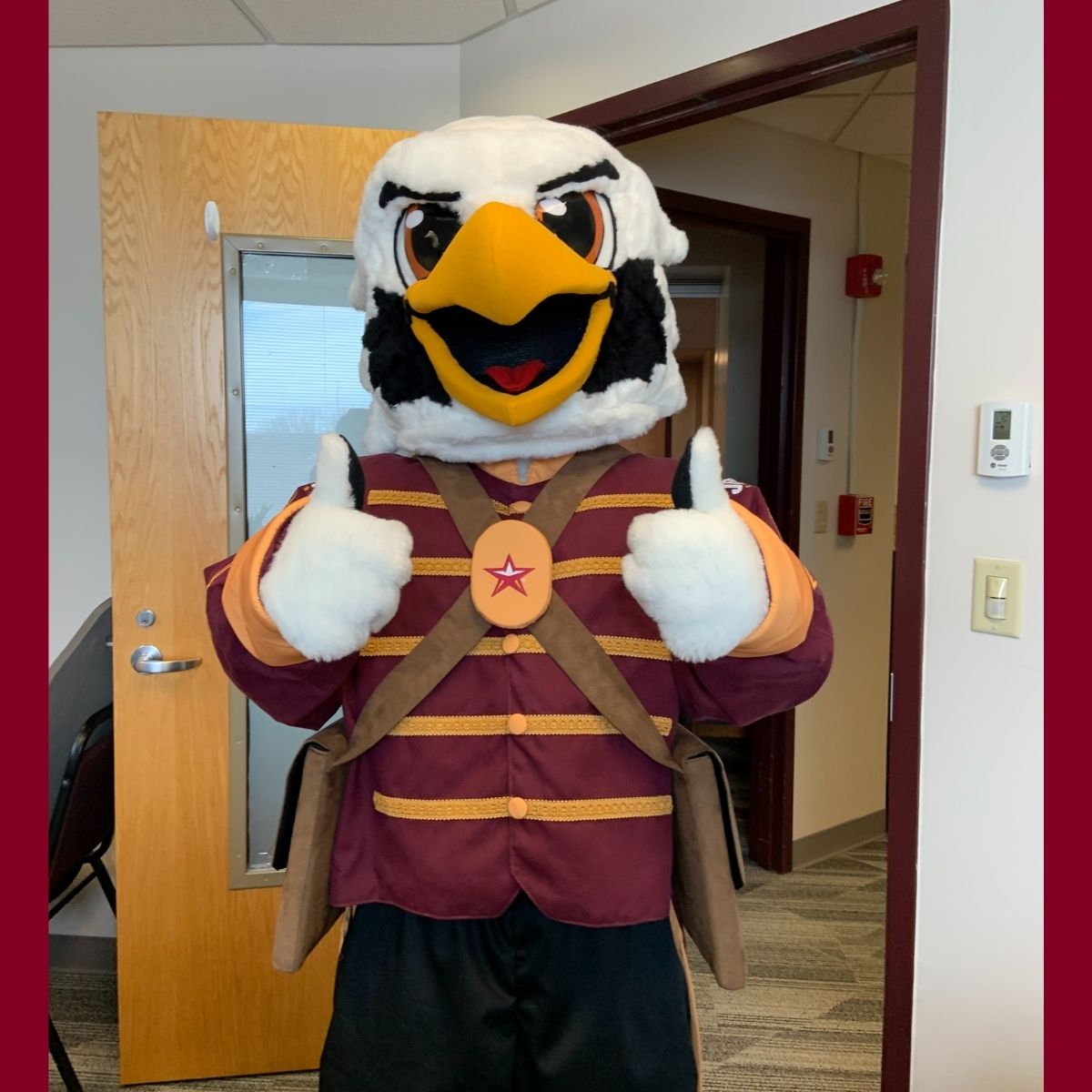 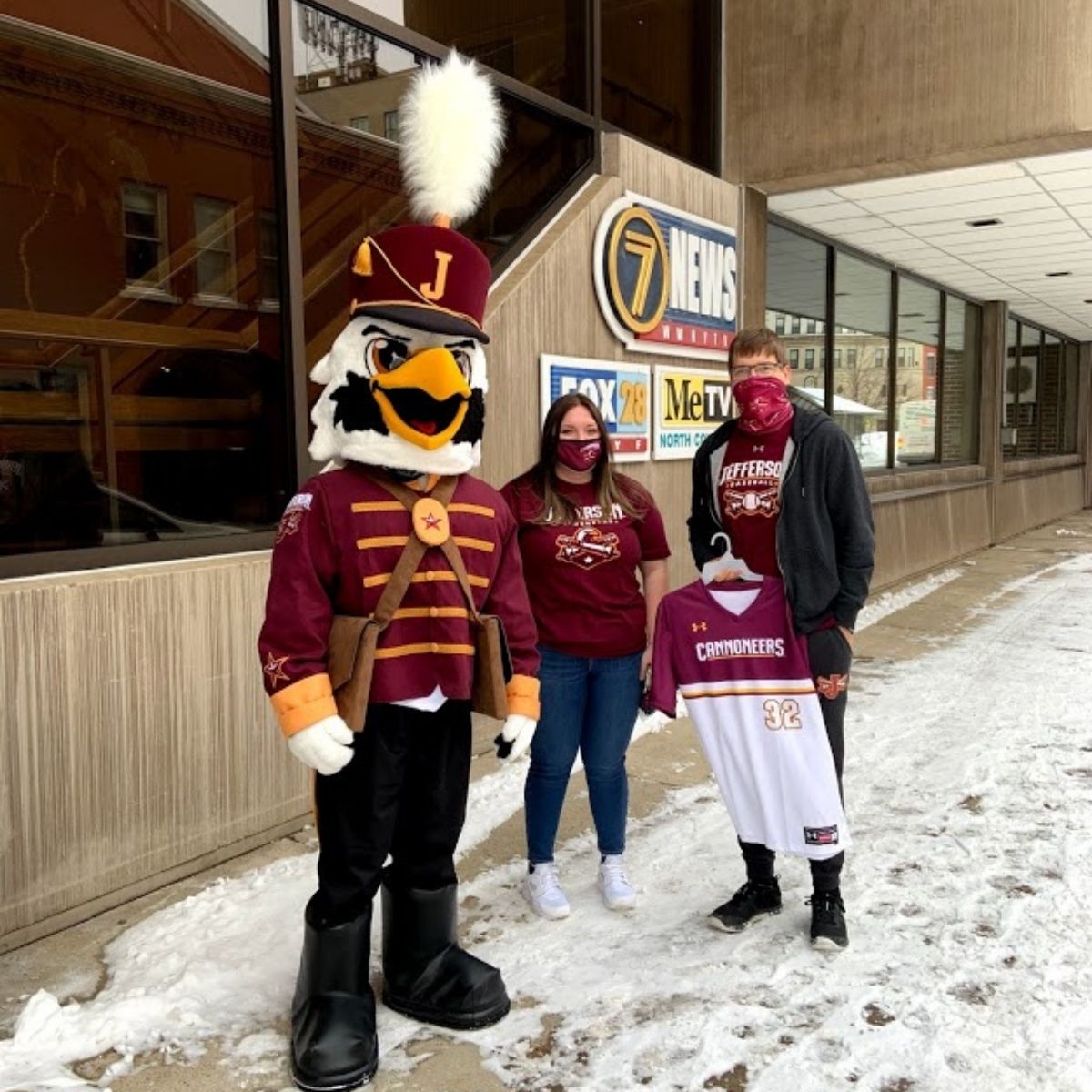 BOOMER T. CANNONEER, reporting for duty!  I work at Jefferson Community College in Watertown, NY. My job is to rally the troops, or “students” as they call them here, and drum up school spirit to help the JCC Cannoneers WIN. BOOM!

I was JUST HATCHED in February 2021 so I didn’t really experience the pandemic doldrums. Since arriving on campus, I’ve been flying high, checking out the athletic fields, and since our campus is the site for our county’s COVID-19 vaccination clinics, I got to be a chaperone for a day!
CAKAAAAAWWWW, SCREEEECH! Sorry, had to clear my throat.
Well, baseball season will be my first sports season at SUNY Jefferson, since I’m a new hatchling, an “eaglet” if you will. I can’t wait to get out on the field!
While I was incubating in my eggshell this January, I binged Cobra Kai and also watched the Michael Jordan documentary, The Last Dance. All that karate and “MJ” basketball got me PUMPED to head to Watertown to meet my new Cannoneer family! HIYAH! SWOOOOOP! 3-POINTER! CACAAAAWWWW!
I’m an eagle so of course I love fish. When I got to Jefferson last month, I discovered the mighty Black River flows through our town, right behind our campus! Do you know what’s in the Black River? SALMON! In the fall, salmon run the Black River to their spawning beds in Lake Ontario, so I’ll be looking forward to some fresh SALMON CEVICHE next lacrosse season!
Turning your camera on is number one. Everyone misses face-to-face interaction so let your teachers and coworkers see you! Also, my eagle-eye likes to spot pets in the background, so bring those furbabies to your next meeting or class.
Even though fish are my main source of protein, I LOVE snacking on crunchy treats like chocolate-covered HORNETS, so I’m looking forward to meeting SUNY Broome’s mascot, Stinger! Watch out Stinger! Boomer T. is coming for you!
Our women’s volleyball team took home the 2019 MSAC TITLE and went to NATIONALS, so I’m thinking I’ll sit down with the Lady Cannoneers volleyball team, enjoy a nice lunch in the courtyard café and soak up some of their winning mojo.
I knew I was headed to a good college when I saw JCC on the cover of Community College Journal magazine, featuring a custom window display of our Jules Center that read “STAY SAFE”!  When I got here, NYS had just made SUNY Jefferson a dispensing site for the COVID-19 vaccine, so I got to meet thousands of community members in my new gym! How cool is that? Our facilities and IT crew are rockin’ and rollin’ each week, getting set up for all the different providers who come in and administer the shots. Each clinic day brings us one step closer to getting our athletes back in uniform and our students back in the classrooms! SCREEEECH!
Q: Why did the eagle cross the road?
A: Because he wasn’t a chicken. BOOOOM!!!
AdmissionsProgramsInformation
©